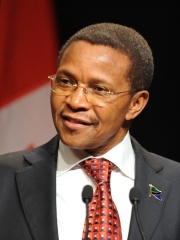 Jakaya Mrisho Kikwete (born 7 October 1950) is a Tanzanian politician who was the fourth president of Tanzania, in office from 2005 to 2015. Prior to his election as president, he was the Minister for Foreign Affairs from 1995 to 2005 under his predecessor, Benjamin Mkapa. He also served as the chairperson of the African Union from 2008–2009 and the chairman of the Southern African Development Community Troika on Peace, Defence and Security from 2012–2013. Read more on Wikipedia

Among politicians, Jakaya Kikwete ranks 8,853 out of 15,710. Before him are Luigi Luzzatti, Ibrahim al-Jaafari, René Mayer, Sinan Hasani, Alvise Giovanni Mocenigo, and Prince Frederick, Duke of York and Albany. After him are Melusine von der Schulenburg, Duchess of Kendal, Marco I Sanudo, Amir Peretz, Xiang of Xia, Nicholas Orsini, and Igor Matovič.