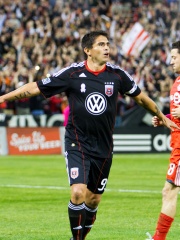 Jaime Moreno Morales (born 19 January 1974 in Santa Cruz de la Sierra) is a former Bolivian footballer now serving as Youth Academy Technical Training Coach for D.C. United in Major League Soccer, and as the head coach of D.C. United's U-23 side.Moreno began his career at Club Blooming and then played for Colombia's Independiente Santa Fe before spending two seasons at the English club Middlesbrough. The rest of his career was spent at D.C. United apart from one season at the New York MetroStars in 2003, and he was the all-time leading scorer in Major League Soccer at the time of his retirement in 2010. On 22 August 2007, in a match against the New York Red Bulls, he scored his 109th MLS goal, surpassing the previous league record set by former Dallas Burn and Real Salt Lake forward Jason Kreis. Read more on Wikipedia

Others born in Bolivia

Among SOCCER PLAYERS In Bolivia