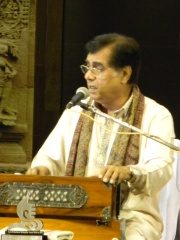 Jagjit Singh, born Jagmohan Singh Dhiman (8 February 1941 – 10 October 2011), popularly known as "The Ghazal King" or "King of Ghazals", was an Indian ghazal and bhajan singer, composer and musician. He sang in numerous languages and is credited for the revival and popularity of ghazal as well as bhajan, both being Indian classical art form, by choosing poetry that was relevant to the masses and composing them in a way that laid more emphasis on the meaning of words and melody evoked by them. In terms of Indian Classical music, his style of composing and Gayaki (singing) is considered as Bol-pradhan, one that lays emphasis on words. Read more on Wikipedia

Since 2007, the English Wikipedia page of Jagjit Singh has received more than 1,702,282 page views. His biography is available in 25 different languages on Wikipedia making him the 1,325th most popular singer.