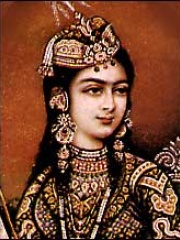 Manavati Bai (Marwari: मानवती बाई; 13 May 1573 – 18 April 1619), better known by her title, Jagat Gosain (Persian:جگات گوسینن), was the consort of the fourth Mughal emperor Jahangir and the mother of his successor, Shah Jahan. Her title means (in Persian) 'Mistress of the World' and (in Sanskrit) 'Priestess of the World'.She is also known as Jodh Bai (Princess of Jodhpur), Taj Bibi (Lady of the Crown) and was also given the posthumous title of Bilqis Makani (Lady Of Pure Abode). Read more on Wikipedia

Among people born in 1573, Jagat Gosain ranks 16. Before her are Sebastiaen Vrancx, Alexander, Duke of Schleswig-Holstein-Sonderburg, Ukita Hideie, Pietro Carrera, Ernest Casimir I, Count of Nassau-Dietz, and Elizabeth of Denmark, Duchess of Brunswick-Wolfenbüttel.  Among people deceased in 1619, Jagat Gosain ranks 17. Before her are Hieronymus Fabricius, Denis Calvaert, Marko Krizin, Richard Burbage, Nicholas Hilliard, and Olivier de Serres. After her is Robert Peake the Elder.