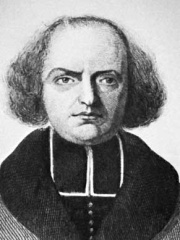 Jacques Paul Migne (French: [miɲ]; 25 October 1800 – 24 October 1875) was a French priest who published inexpensive and widely distributed editions of theological works, encyclopedias, and the texts of the Church Fathers, with the goal of providing a universal library for the Catholic priesthood.The Patrologia Latina and the Patrologia Graeca, (along with the Monumenta Germaniae Historica) are among the great 19th century contributions to the scholarship of patristics and the Middle Ages. Read more on Wikipedia

Since 2007, the English Wikipedia page of Jacques Paul Migne has received more than 44,662 page views. His biography is available in 26 different languages on Wikipedia making him the 981st most popular religious figure.

Among religious figures, Jacques Paul Migne ranks 980 out of 2,001. Before him are Nadezhda von Meck, Shirali Muslimov, Eisai, Canaan, Valentin Haüy, and Paul of the Cross. After him are Agostino Casaroli, Accursius, Hudson Taylor, Mohammad Hussein Fadlallah, Clement Mary Hofbauer, and Lidwina.