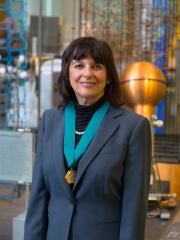 Jacqueline K. Barton (born May 7, 1952 New York City, NY), is an American chemist. She worked as a Professor of Chemistry at Hunter College (1980–82), and at Columbia University (1983–89) before joining the California Institute of Technology (1989-to present). In 1997 she became the Arthur and Marian Hanisch Memorial Professor of Chemistry and from 2009 to 2019, the Norman Davidson Leadership Chair of the Division of Chemistry and Chemical Engineering at Caltech. She currently is the John G. Kirkwood and Arthur A. Read more on Wikipedia

Among chemists, Jacqueline Barton ranks 508 out of 510. Before her are Yellapragada Subbarow, Percy Lavon Julian, Martyn Poliakoff, Donald Howard Menzel, Harry B. Gray, and Darshan Ranganathan. After her are Mai Thi Nguyen-Kim and Omar M. Yaghi.