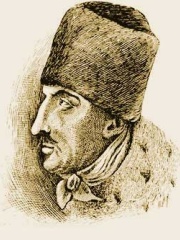 Jacob Joseph Frank (Hebrew: יעקב פרנק‎; Polish: Jakub Józef Frank; born Jakub Lejbowicz; 1726 – December 10, 1791) was an 18th-century Polish-Jewish religious leader who claimed to be the reincarnation of the self-proclaimed messiah Sabbatai Zevi (1626–1676) and also of the biblical patriarch Jacob. The Jewish authorities in Poland excommunicated Frank and his followers due to his heretical doctrines that included deification of himself as a part of a trinity and other controversial concepts such as neo-Carpocratian "purification through transgression".Frank arguably created a new denomination of Judaism, now referred to as Frankism, which incorporated some aspects of Christianity into Judaism. The development of Frankism was one of the consequences of the messianic movement of Sabbatai Zevi. Read more on Wikipedia

Since 2007, the English Wikipedia page of Jacob Frank has received more than 260,842 page views. His biography is available in 18 different languages on Wikipedia making him the 884th most popular religious figure.

Among RELIGIOUS FIGURES In Ukraine