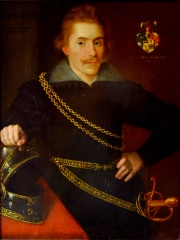 Field Marshal and Count Jacob Pontusson De la Gardie (Reval, 20 June 1583 – Stockholm, 22 August 1652) was a statesman and a soldier of the Swedish Empire, and a Marshal from 1620 onward.He was Privy Councilor from 1613 onward, Governor of Swedish Estonia in 1619–1622, Governor-General of Livonia in 1622–1628 (conquered by the Swedish Empire in 1621, and referred to as Swedish Livonia in 1629–1721), and Lord High Constable from 1620. He introduced reforms based on the then novel Dutch military doctrine into the Swedish army. He commanded the Swedish forces in Russia and against the Polish–Lithuanian Commonwealth. Read more on Wikipedia

Jacob de la Gardie is most famous for his service as a Swedish Field Marshal and Privy Councillor. He was also the Governor of Estonia, Finland, Livonia, and Ingria.

Among politicians, Jacob De la Gardie ranks 3,429 out of 15,710. Before him are Empress Genmei, Coluccio Salutati, Emperor Sujin, William Penn, Charles I Gonzaga, Duke of Mantua, and Döme Sztójay. After him are Florian Geyer, Kyösti Kallio, John Major, Wim Duisenberg, Ramiro I of Aragon, and Filippo Maria Visconti.