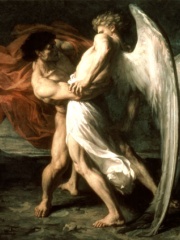 Jacob (; Hebrew: יַעֲקֹב‎, Modern: Yaʿaqōv , Tiberian: Yaʿăqōḇ; Arabic: يَعْقُوب, romanized: Yaʿqūb; Greek: Ἰακώβ, romanized: Iakṓb), later given the name Israel, is regarded as a patriarch of the Israelites and is an important figure in Abrahamic religions, such as Judaism, Christianity, and Islam. Jacob first appears in the Book of Genesis, where he is described as the son of Isaac and Rebecca, and the grandson of Abraham, Sarah, and Bethuel. According to the biblical account, he was the second-born of Isaac's children, the elder being Jacob's fraternal twin brother, Esau. Read more on Wikipedia

Jacob is most famous for being the father of the twelve tribes of Israel.

Page views of Jacobs by language

Among religious figures, Jacob ranks 14 out of 2,238. Before him are Paul the Apostle, Solomon, Saint Peter, John the Baptist, Zoroaster, and Saint Nicholas. After him are Pope John Paul II, Francis of Assisi, Aaron, Isaac, Saint George, and Saint Joseph.