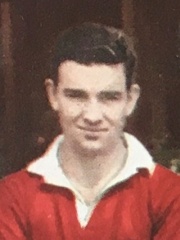 John "Jackie" Blanchflower (7 March 1933 – 2 September 1998) was a Northern Irish footballer. He graduated from Manchester United's youth system and played for the club on 117 occasions, winning two league titles, before his career was cut short due to injuries sustained in the Munich air disaster. Read more on Wikipedia

Since 2007, the English Wikipedia page of Jackie Blanchflower has received more than 208,804 page views. Her biography is available in 16 different languages on Wikipedia making her the 2,465th most popular soccer player.