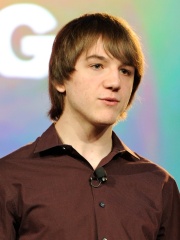 Jack Thomas Andraka (born January 8, 1997) is an American scientist, inventor, and cancer researcher. As a high school student, he won the grand prize at the 2012 Intel International Science and Engineering Fair with a method to possibly detect the early stages of pancreatic and other cancers. His work has been questioned by some scientists and writers because it has not been published in a peer-reviewed scientific journal. Read more on Wikipedia

Among inventors, Jack Andraka ranks 353 out of 355. Before him are Hary Gunarto, Boyan Slat, David Hahn, George Hotz, Franky Zapata, and Tony Fadell. After him are Simone Giertz.