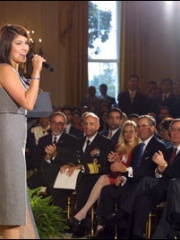 Jacquelyn "Jaci" Davette Velasquez (Spanish Jaci Velásquez, born October 15, 1979) is an American actress and Contemporary Christian and Latin pop singer and songwriter, performing in both English and Spanish. Velasquez has sold almost three million albums in the US, recorded three Platinum and three Gold albums, and recorded 16 singles that hit No. 1 plus six more that entered the top 10. Read more on Wikipedia

Among singers, Jaci Velasquez ranks 3,090 out of 3,541. Before her are Stefanie Heinzmann, Brandi Carlile, Leonora, David Civera, Kurt Vile, and Stephanie. After her are Ace Wilder, Zinaida Kupriyanovich, Katerine Duska, Nicki French, Iyaz, and Five for Fighting.