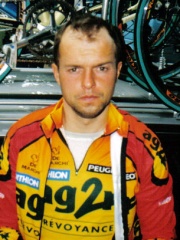 Jaan Kirsipuu (born 17 July 1969 in Tartu) is an Estonian former road bicycle racer, who currently works as a directeur sportif for UCI Continental team Tartu2024–BalticChainCycling.com.He spent the majority of his career riding under the management of Vincent Lavenu, initially joining Lavenu's Chazal–Vanille et Mûre team as a stagiaire and staying with the squad in its various incarnations for 12 years, taking a total of 124 race wins for the team. Kirsipuu initially retired at the end of the 2006, but participated in the 2007 Estonian championship, becoming time trial champion for the sixth time. In 2008 he was the manager of Latvian UCI Continental cycling team Rietumu Banka–Riga. Read more on Wikipedia

Since 2007, the English Wikipedia page of Jaan Kirsipuu has received more than 31,450 page views. His biography is available in 20 different languages on Wikipedia making him the 211th most popular cyclist.

Among CYCLISTS In Estonia