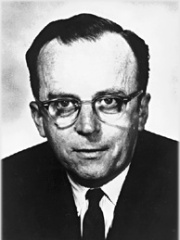 Joseph Carl Robnett Licklider (; March 11, 1915 – June 26, 1990), known simply as J. C. R. or "Lick", was an American psychologist and computer scientist who is considered one of the most important figures in computer science and general computing history. He is particularly remembered for being one of the first to foresee modern-style interactive computing and its application to all manner of activities; and also as an Internet pioneer with an early vision of a worldwide computer network long before it was built. Read more on Wikipedia

Since 2007, the English Wikipedia page of J. C. R. Licklider has received more than 272,557 page views. His biography is available in 20 different languages on Wikipedia making him the 26th most popular computer scientist.