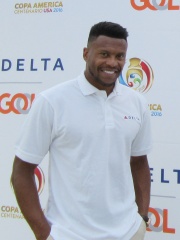 Júlio César Clemente Baptista (born 1 October 1981) is a former Brazilian professional footballer who played as an attacking midfielder or a forward. He is nicknamed "The Beast" due to his size and physical presence on the football field.Baptista began his career as a defensive midfielder, and after a series of impressive performances for his hometown squad São Paulo FC, Baptista signed for Sevilla FC in 2003. Upon signing for Sevilla, he was converted into a forward, and in his two seasons, he scored 50 goals, leading to his 2005 transfer to Spanish giants Real Madrid. Read more on Wikipedia

Since 2007, the English Wikipedia page of Júlio Baptista has received more than 947,009 page views. His biography is available in 40 different languages on Wikipedia making him the 1,197th most popular soccer player.