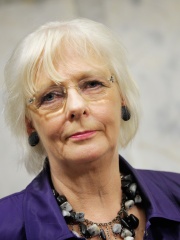 Jóhanna Sigurðardóttir (Icelandic pronunciation: ​[ˈjouːhana ˈsɪːɣʏrðarˌtouʰtɪr̥]; born 4 October 1942) is an Icelandic politician and the former Prime Minister of Iceland. She became active in the trade union movement, serving as an officer. Elected an MP from 1978 to 2013, she was appointed as Iceland's Minister of Social Affairs and Social Security, serving from 1987 to 1994, and from 2007 until 2009. Read more on Wikipedia

Since 2007, the English Wikipedia page of Jóhanna Sigurðardóttir has received more than 659,302 page views. Her biography is available in 63 different languages on Wikipedia making her the 3,624th most popular politician.

Among politicians, Jóhanna Sigurðardóttir ranks 3,601 out of 14,801. Before her are Timoleon, Empress Jingū, Shapur III, Callias II, Taejodae of Goguryeo, and Shamshi-Adad I. After her are Princess Irene of Greece and Denmark, Prince Eugen, Duke of Närke, Halimah bint Abi Dhuayb, Louis Joseph, Duke of Vendôme, Birabongse Bhanudej, and Qazi Muhammad.

Among POLITICIANS In Iceland