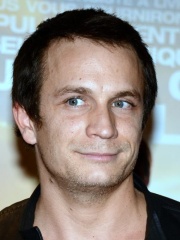 Jérémie Renier (French: [ʁenje]; born 6 January 1981) is a Belgian actor. His film debut was in the critically praised La Promesse (1996), directed by Luc and Jean-Pierre Dardenne. He became better known to worldwide audiences in Brotherhood of the Wolf (2001) and L'Enfant (2005). Read more on Wikipedia

Among actors, Jérémie Renier ranks 6,768 out of 10,030. Before him are Sophia Myles, Gary Valentine, Princess Theodora of Greece and Denmark, Joan Caulfield, Monique Coleman, and Tia Mowry. After him are Giselle Itié, Danny Thomas, Cristiana Oliveira, Nick Lachey, Roberto Accornero, and Lucy Boynton.