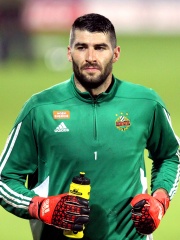 Ján Novota (born 29 November 1983) is a retired Slovak football goalkeeper. Novota made his national team debut against Montenegro on 23 May 2014 (2-0 win), playing the second half of the friendly fixture. Later he was fielded in 3 additional friendly games against Iceland, Georgia and Austria, which was his last international cap on 15 November 2016. Read more on Wikipedia

Since 2007, the English Wikipedia page of Ján Novota has received more than 34,847 page views. Her biography is available in 17 different languages on Wikipedia making her the 6,851st most popular soccer player.