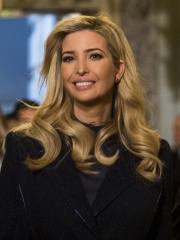 Ivana Marie "Ivanka" Trump (; born October 30, 1981) is an American businesswoman and the first daughter of former President Donald Trump; she was a senior advisor in his administration, and also was the director of the Office of Economic Initiatives and Entrepreneurship. She is the daughter of Trump's first wife, Ivana, and is the first Jewish member of a first family, having converted before marrying her husband, Jared Kushner.She was an executive vice president of the family-owned Trump Organization. She was also a boardroom judge on her father's TV show, The Apprentice. Read more on Wikipedia

Among writers, Ivanka Trump ranks 3,534 out of 5,794. Before her are Vsevolod Ivanov, Lyudmila Petrushevskaya, Arthur Waley, Georgette Heyer, Sophie Kinsella, and Apion. After her are Erri De Luca, José Cadalso, Sigbjørn Obstfelder, Olaf Bull, Maxwell Anderson, and Jacob of Edessa.