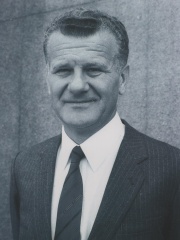 Ivan Stambolić (Serbian: Иван Стамболић; 5 November 1936 – 25 August 2000) was a Serbian politician. He was a prominent official of the Communist Party of Yugoslavia and the President of the Presidency of Serbia in the 1980s. In August 2000, he was assassinated. Read more on Wikipedia

Since 2007, the English Wikipedia page of Ivan Stambolić has received more than 122,320 page views. His biography is available in 18 different languages on Wikipedia making him the 4,933rd most popular politician.

Among politicians, Ivan Stambolić ranks 4,904 out of 14,801. Before him are Adalbert of Italy, Ka, Murad Bey, Bernhard Rust, Ferdinand Albert II, Duke of Brunswick-Wolfenbüttel, and Marcus Antistius Labeo. After him are Nicolae Iorga, Prayut Chan-o-cha, Pausanias of Macedon, José Sarney, Maria Theresa of Austria-Este, Queen of Sardinia, and Tulga.