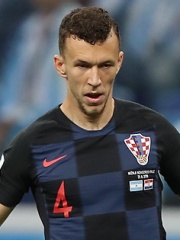 Ivan Perišić (Croatian pronunciation: [ǐʋan pěriʃitɕ]; born 2 February 1989) is a Croatian professional footballer who plays for Serie A club Inter Milan, and the Croatia national team. He usually plays as a winger, but can also be deployed as an attacking midfielder or second striker. A product of the Hajduk Split and Sochaux youth academies, Perišić made a name for himself while playing for Club Brugge, where he was the Belgian Pro League top goalscorer and was named Belgian Footballer of the Year for 2011. Read more on Wikipedia

Since 2007, the English Wikipedia page of Ivan Perišić has received more than 3,116,123 page views. His biography is available in 59 different languages on Wikipedia making him the 991st most popular soccer player.