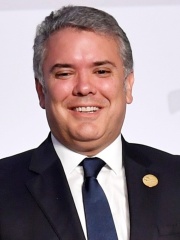 Iván Duque Márquez (Spanish pronunciation: [iˈβan ˈdu.ke ˈmaɾkes]; born 1 August 1976) is a Colombian politician and lawyer who is the current president of Colombia. He was elected as Colombia's youngest president, as the candidate from the Democratic Centre Party in the 2018 presidential election. Backed by his mentor, former president and senator Alvaro Uribe, he ran a campaign where he stood against the Havana Accords with the guerilla group FARC.His tenure has been criticized for the increasing incidence of massacres of unarmed civilians by criminal organizations, the increasing number of murders against community leaders (205 since taking office), despite the fact that murders of community leaders decreased 5 percent in 2019, compared to 2018, according to Indepaz; the increasing number of murders against ex-guerrilla fighters that surrendered under a previous peace agreement (224), the increasing murder of union leaders and environmentalists and the impunity related to these cases. Read more on Wikipedia