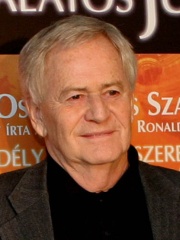 István Szabó (Hungarian: [ˈsɒboː ˈiʃtvaːn]; born 18 February 1938) is a Hungarian film director, screenwriter, and opera director. Szabó is the most internationally famous Hungarian filmmaker since the late 1960s. Working in the tradition of European auteurism, he has made films that represent many of the political and psychological conflicts of Central Europe's recent history, as well as of his own personal history. Read more on Wikipedia

Since 2007, the English Wikipedia page of István Szabó has received more than 147,272 page views. His biography is available in 32 different languages on Wikipedia making him the 124th most popular film director.

Among FILM DIRECTORS In Hungary