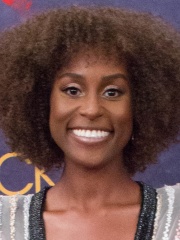 Jo-Issa Rae Diop (born January 12, 1985), credited professionally as Issa Rae, is an American actress, writer, producer, and comedian. Rae first garnered attention for her work on the YouTube web series Awkward Black Girl. Since 2011, Rae has continued to develop her YouTube channel, which features various short films, web series, and other content created by Black people.Rae has achieved wider recognition as the co-creator, co-writer, and star of the HBO television series Insecure (2016–2021), for which she has been nominated for multiple Golden Globes Awards and Primetime Emmy Awards. Read more on Wikipedia