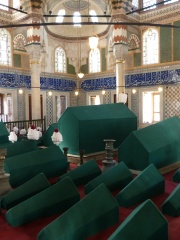 Ishmael became the sultan of Morocco in 1672. He was most famous for his expansion of the Moroccan navy.

Among noblemen, Ismihan Sultan ranks 180 out of 843. Before her are Prince Bertil, Duke of Halland, Maria Anna Victoria of Bavaria, Christina of Denmark, Arthur I, Duke of Brittany, Jobst of Moravia, and Albrecht III Achilles, Elector of Brandenburg. After her are Elizabeth of Austria, Prince Leopold of Bavaria, Daniel of Moscow, Charles, Count of Angoulême, Grand Duke Paul Alexandrovich of Russia, and Memnon of Rhodes.

Among people born in 1544, Ismihan Sultan ranks 4. Before her are Francis II of France, William Gilbert, and Torquato Tasso. After her are Anna of Saxony, Renata of Lorraine, Maria Temryukovna, Sigismund Rákóczi, Gillis van Coninxloo, and Guillaume de Salluste Du Bartas. Among people deceased in 1585, Ismihan Sultan ranks 6. Before her are Pope Gregory XIII, Pierre de Ronsard, Andrea Gabrieli, Yermak Timofeyevich, and Thomas Tallis. After her are Rembert Dodoens, Anne of Denmark, Electress of Saxony, Luca Cambiaso, and Nicolò da Ponte.

Among NOBLEMEN In Turkey