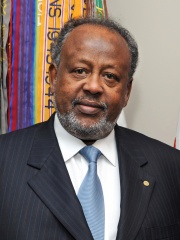 Ismaïl Omar Guelleh (Somali: Ismaaciil Cumar Geelle; Arabic: إسماعيل عمر جليه) (born 27 November 1947) is the current President of Djibouti. He has been in office since 1999, making him one of the longest-serving rulers in Africa. He is often referred to by his initials, IOG. Guelleh was first elected as President in 1999 as the handpicked successor to his uncle, Hassan Gouled Aptidon, who had ruled Djibouti since independence in 1977. Read more on Wikipedia

Ismaïl Omar Guelleh is most famous for being the president of Djibouti since 1999. He is also the first president to be democratically elected in the country.

Among politicians, Ismaïl Omar Guelleh ranks 3,751 out of 15,577. Before him are Emperor Gong of Song, Latife Uşşaki, Emperor Seimu, Henry V, Duke of Bavaria, Augustus, Elector of Saxony, and Agis II. After him are Empress Dowager Ci'an, Masahito, Prince Hitachi, Tewfik Pasha, Constantin Fehrenbach, Ranavalona I, and Charles, Grand Duke of Baden.