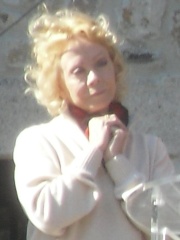 Isabelle Aubret (born 27 July 1938) is a French singer. Born as Thérèse Coquerelle in Lille, France, she won the Eurovision Song Contest in 1962 representing France and singing "Un premier amour" ("A first love"), with music composed by Claude-Henri Vic and lyrics by Roland Stephane Valade. In 1968, she returned to the contest, again representing France, finishing third, and singing "La source" (The Spring) with music by Daniel Faure and lyrics by Henri Dijan, and Guy Bonnet.Aubret was a participant in the French national heats for Eurovision in other years. Read more on Wikipedia

Since 2007, the English Wikipedia page of Isabelle Aubret has received more than 67,257 page views. Her biography is available in 33 different languages on Wikipedia making her the 443rd most popular singer.

Among singers, Isabelle Aubret ranks 445 out of 3,001. Before her are Neda Ukraden, Perry Como, Ricky Nelson, Sertab Erener, Nellie Melba, and Ruslana. After her are LP, Bobby Solo, Gohar Gasparyan, Haddaway, Dusty Hill, and Taylor Swift.