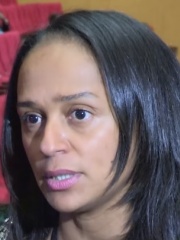 Isabel dos Santos (born 20 April 1973) is an Angolan-Russian businesswoman, the eldest child of Angola's former President José Eduardo dos Santos, who ruled the country from 1979 to 2017. Once considered Africa's richest woman according to Forbes magazine, with a net worth exceeding US$2 billion Forbes, she was dropped from the magazine's list in January 2021: they stated that it was not possible to calculate her wealth, given the freezing of her assets in Angola, Portugal and the Netherlands. Additionally, according to Forbes, she owes $340 million in debt to the Portuguese company PT Ventures.In 2013 Forbes described how dos Santos acquired her wealth by taking stakes in companies doing business in Angola, suggesting that her wealth came almost entirely from her family's power and connections.The Angolan Government has, since 2018, been trying to prosecute Isabel dos Santos for past corruption crimes that may have led to Angola's ongoing recession crisis. Read more on Wikipedia

Among BUSINESSPEOPLE In Azerbaijan

Among businesspeople born in Azerbaijan, Isabel dos Santos ranks 2. Before her are Vagit Alekperov (1950).