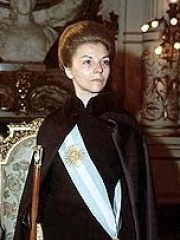 Isabel Martínez de Perón (Spanish pronunciation: [isaˈβel maɾˈtinez de peˈɾon], born María Estela Martínez Cartas, 4 February 1931), also known as Isabelita, is an Argentine politician who served as President of Argentina from 1974 to 1976. She was the first female republican head of state in the world. Isabel Perón was the third wife of President Juan Perón. Read more on Wikipedia

Among politicians, Isabel Martínez de Perón ranks 1,036 out of 15,577. Before her are Wangari Maathai, Abd el-Krim, Princess Stéphanie of Belgium, Nestor, Trygve Lie, and Zeno. After her are Christian I of Denmark, Faisal I of Iraq, Feodor II of Russia, Grover Cleveland, Amin al-Husseini, and Jérôme Bonaparte.