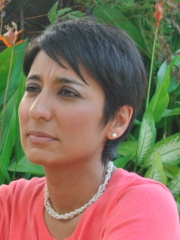 Irshad Manji (born 1968) is a Canadian educator and the author of The Trouble with Islam Today (2004) and Allah, Liberty and Love (2011), both of which have been banned in several Muslim countries. Her latest book, Don't Label Me, was published in February 2019. Manji is a senior fellow at the Annenberg Center on Communication Leadership & Policy of the University of Southern California.Manji also produced a PBS documentary in the America at a Crossroads series, titled Faith Without Fear, which was nominated for an Emmy Award in 2008. Read more on Wikipedia

Since 2007, the English Wikipedia page of Irshad Manji has received more than 397,633 page views. Her biography is available in 24 different languages on Wikipedia making her the 4,829th most popular writer.

Among WRITERS In Uganda