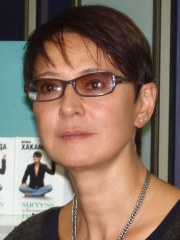 Irina Mutsuovna Khakamada (Russian: Ири́на Муцу́овна Хакама́да, IPA: [ɪˈrʲinə mʊˈtsuəvnə xəkɐˈmadə]; Japanese: イリーナ・ハカマダ; born April 13, 1955, in Moscow) is a Russian economist, political activist, journalist, publicist and politician who ran in the 2004 Russian presidential election. Khakamada was a former member (deputy) of the lower house (the State Duma) of the Russian parliament for three convocations (electoral terms, 1993–2003) and Vice-Chair of the house; co-chair of a political party Union of Right Forces (1999–2003), presidential candidate of the Russian Federation (2004), member of the Presidential Council for the Development of Civil Society and Human Rights (2012–2018). In 1995, Time named Khakamada a 21st-century politician among 100 well-known women in the world.In 2002, Khakamada served as a rapporteur from Russia at the 57th session of the UN General Assembly. Read more on Wikipedia

Since 2007, the English Wikipedia page of Irina Khakamada has received more than 97,576 page views. Her biography is available in 27 different languages on Wikipedia making her the 11,355th most popular politician.