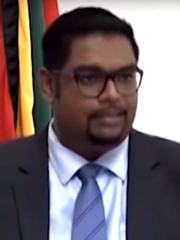 Mohamed Irfaan Ali (born 25 April 1980) is a Guyanese politician who is the President of Guyana since August 2020. Ali is the first Muslim President of Guyana, along with being the second Muslim head of state in the Western Hemisphere after Noor Hassanali.Ali was a Member of Parliament (MP) and the Minister of Housing before becoming the presidential candidate of the People's Progressive Party/Civic (PPP/C) in the March 2020 general election. Read more on Wikipedia

Among politicians, Irfaan Ali ranks 15,638 out of 15,710. Before him are Martha Roby, Danica Roem, Nanfadima Magassouba, Mhairi Black, Aileen Baviera, and Sviatlana Tsikhanouskaya.

Others born in Guyana

Among POLITICIANS In Guyana