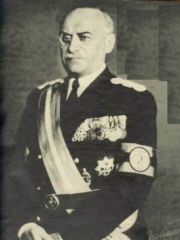 Ion Gigurtu (Romanian pronunciation: [iˈon d͡ʒiˈɡurtu]; 24 June 1886 – 24 November 1959) was a far-right Romanian politician, Land Forces officer, engineer and industrialist who served a brief term as Prime Minister from 4 July to 4 September 1940, under the personal regime of King Carol II. A specialist in mining and veteran of both the Second Balkan War and World War I, he made a fortune in interwar Greater Romania. Gigurtu began his career in politics with the People's Party (PP) and the National Agrarian Party, moving closer to the far right during the 1930s, and serving as Minister of Industry and Commerce in the cabinet of Octavian Goga. Read more on Wikipedia

Among politicians, Ion Gigurtu ranks 10,410 out of 15,710. Before him are Sadiq al-Mahdi, Roselyne Bachelot, Princess Elisabeth of Saxe-Altenburg, Menkheperre, Phraya Manopakorn Nititada, and Achaeus. After him are Isa Mustafa, Phan Văn Khải, David A. Granger, William Tubman, Anaxidamus, and Haji Mohammad Chamkani.