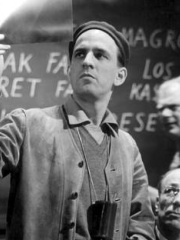 Ernst Ingmar Bergman (14 July 1918 – 30 July 2007) was a Swedish film director, screenwriter, producer and playwright. Widely considered one of the greatest and most influential filmmakers of all time, his films are known as "profoundly personal meditations into the myriad struggles facing the psyche and the soul." Some of his most acclaimed work includes The Seventh Seal (1957), Wild Strawberries (1957), The Virgin Spring (1960), Through a Glass Darkly (1961), Persona (1966), and Fanny and Alexander (1982). Bergman directed more than 60 films and documentaries for cinematic release and for television screenings, most of which he also wrote. Read more on Wikipedia

Ingmar Bergman is most famous for his film work, which includes Persona, The Seventh Seal, and Wild Strawberries.

Among FILM DIRECTORS In Sweden