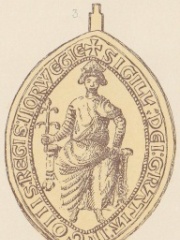 Inge Magnusson or Inge Baglar-king was from 1196 to 1202 the Bagler candidate for pretender to the Norwegian throne during the Civil war era in Norway.In 1197, a serious challenge to the reign of King Sverre of Norway arose. Several prominent opponents of Sverre, including bishop Nikolas Arnesson of Oslo, who had been a halfbrother of King Inge I of Norway and exiled archbishop Erik Ivarsson met at the marketplace of Halör in Skåne, then part of Denmark. They took Inge Magnusson, purported son of King Magnus V of Norway as their figurehead-king. Read more on Wikipedia

Since 2007, the English Wikipedia page of Inge Magnusson has received more than 17,709 page views. His biography is available in 15 different languages on Wikipedia. Inge Magnusson is the 14,487th most popular politician (down from 10,270th in 2019).