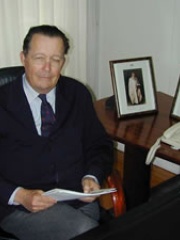 Carlos Maria Alfonso Marcelo de Borbón-Dos Sicilias y de Borbón-Parma, Infante of Spain, Duke of Calabria (16 January 1938 – 5 October 2015) was, at his death, the last infante of Spain during the reigns of his cousins King Juan Carlos I and King Felipe VI. Additionally, he was also one of two claimants to the headship of the dynasty which ruled the Kingdom of the Two Sicilies prior to its incorporation into the Kingdom of Italy in 1861, in which capacity he was also the Grand Master of one of the three branches of the Sacred Military Constantinian Order of Saint George. Read more on Wikipedia

Page views of Infante Carlos, Duke of Calabrias by language

Among politicians, Infante Carlos, Duke of Calabria ranks 5,351 out of 15,710. Before him are Claude Françoise de Lorraine, Archduke Felix of Austria, Emperor Konoe, Violet Jessop, Gaius Duilius, and Hwang Jang-yop. After him are Margaret I, Countess of Burgundy, Emperor Shengzong of Liao, Emperor Kōnin, Thongloun Sisoulith, Richard Glücks, and Benjamin Mkapa.