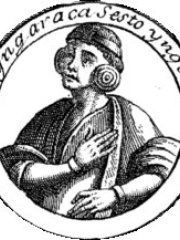 Inca Roca (Quechua Inka Roq'a, "magnanimous Inca") was the sixth Sapa Inca of the Kingdom of Cusco (beginning around CE 1350) and the first of the Hanan ("upper") Qusqu dynasty. His wife was Mama Michay, and his son was Yawar Waqaq. He had four other famous sons, Inca Paucar, Huaman Taysi Inca, and Vicaquirau Inca. Read more on Wikipedia

Since 2007, the English Wikipedia page of Inca Roca has received more than 41,286 page views. His biography is available in 24 different languages on Wikipedia (up from 23 in 2019). Inca Roca is the 5,861st most popular politician (up from 6,003rd in 2019), the 28th most popular biography from Peru and the 15th most popular Peruvian Politician.

Among politicians, Inca Roca ranks 5,861 out of 15,710. Before him are Feng Guozhang, Huo Guang, Joan of Valois, Queen of Navarre, Chōsokabe Motochika, Agesipolis I, and Noboru Takeshita. After him are Franz Six, Ermesinde of Carcassonne, Princess Margaret of Denmark, Anton Mussert, Leon of Sparta, and Otto I, Duke of Carinthia.

Among people born in 1350, Inca Roca ranks 12. Before him are Vincent Ferrer, Malhun Hatun, Margaret III, Countess of Flanders, John I of Aragon, Pierre d'Ailly, and Ivan Shishman of Bulgaria. After him are Qara Osman, Leonor Teles, Urus Khan, Agnolo Gaddi, Anna of Trebizond, and Guillaume Cale. Among people deceased in 1380, Inca Roca ranks 7. Before him are Catherine of Siena, Charles V of France, Haakon VI of Norway, Bertrand du Guesclin, Mamai, and Elizabeth of Poland, Queen of Hungary. After him are Emperor Kōmyō, Manuel Kantakouzenos, and Theodoric of Prague.