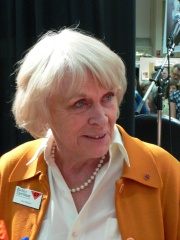 Maire-Ilon Wikland (née Pääbo; born February 5, 1930) is an Estonian-born Swedish artist and illustrator.Wikland was born in Tartu, Estonia and raised in Haapsalu, Lääne County on Estonia's Baltic coast. In 1944 she escaped with the family of a classmate from the second Soviet occupation of Estonia, to Sweden, where she arrived as a refugee. In 1953 Wikland applied for a job as illustrator at Rabén & Sjögren. Read more on Wikipedia

Among religious figures, Ilon Wikland ranks 1,258 out of 2,238. Before her are Antipope Sylvester IV, Reginald Lee, Thomas of Villanova, Ahijah the Shilonite, Eulogius of Córdoba, and Oswald of Northumbria. After her are Amphilochius of Iconium, Wolf Messing, Theophilus Presbyter, Babylas of Antioch, George Alencherry, and Macrina the Younger.

Among RELIGIOUS FIGURES In Estonia

Among religious figures born in Estonia, Ilon Wikland ranks 2. Before her are Patriarch Alexy II of Moscow (1929). After her are Alexander Vostokov (1781).