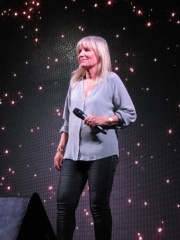 Hanna Dresner-Tzakh (Hebrew: חנה דרזנר; born 17 September 1947), better known by her stage name Ilanit (אילנית‎, Hebrew pronunciation: [ilaˈnit]), is an Israeli singer. She was one of Israel's most popular singers from the late 1960s to the 1980s, both as a soloist and in the duo Ilan ve-Ilanit. Ilanit also represented Israel twice in the Eurovision Song Contest. Read more on Wikipedia

Page views of Ilanits by language

Among singers, Ilanit ranks 1,362 out of 3,528. Before her are Melanie C, Gala, MC Ren, Jackie DeShannon, Steve Lawrence, and Simone Simons. After her are Siti Nurhaliza, Mac Miller, Annie Palmen, Koffi Olomide, Sandra Reemer, and Kirka.

Among SINGERS In Israel