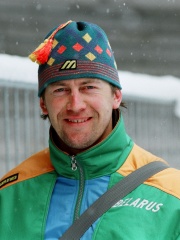 Igor Nikolayevich Zhelezovski or Ihar Mikalayevich Zhaliazoŭski (Russian: Игорь Николаевич Железовский; Belarusian: Ігар Мікалаевіч Жалязоўскі; born 1 July 1963) is a former speed skater, considered to be one of the best sprinters ever. His imposing physical appearance resulted in the nicknames "Igor the Terrible" and "The bear from Minsk". Originally competing for the Soviet Union, then for the Commonwealth of Independent States, and finally for Belarus, he became World Sprint Champion a record number of six times, a record still unequalled as of 2015. Read more on Wikipedia

Among SKATERS In Belarus

Among skaters born in Belarus, Igor Zhelezovski ranks 1. After him are Natalia Mishkutionok (1970).