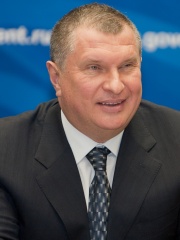 Igor Ivanovich Sechin (Russian: И́горь Ива́нович Се́чин; born 7 September 1960) is a Russian oligarch and a government official, considered a close ally and "de facto deputy" of Vladimir Putin. Sechin is often described as one of Putin's most conservative counselors and the leader of the Kremlin's Siloviki faction, a lobby gathering former security services agents. Until 21 May 2012, he served as Deputy Prime Minister of Russia in Vladimir Putin's cabinet, and he is currently the chief executive officer, president and chairman of the management board of Rosneft, the Russian state oil company. Read more on Wikipedia