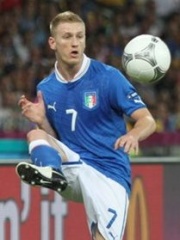 Ignazio Abate (Italian pronunciation: [iɲˈɲattsjo aˈbaːte]; born 12 November 1986) is an Italian professional footballer who plays as a full-back. A former winger, he is also capable of playing as a wide midfielder or as a wing-back, and has even been used as a centre-back on occasion; he is renowned for his stamina, quick sprints, and ability to make attacking runs down the right flank. In his prime, he was one of the fastest players in the top leagues of European football.Abate started playing football with amateur club Rescaldina, before joining Milan's youth system in 1999 and making his professional debut for the club in December 2003. Read more on Wikipedia

Since 2007, the English Wikipedia page of Ignazio Abate has received more than 605,036 page views. His biography is available in 51 different languages on Wikipedia making him the 2,357th most popular soccer player.