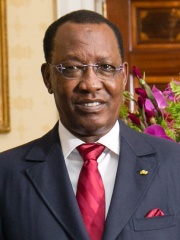 Marshal Idriss Déby Itno (Arabic: إدريس ديبي‎ Idrīs Daybī Itnū; born 18 June 1952) is a Chadian politician who has been the President of Chad since 1990. He is also head of the ruling Patriotic Salvation Movement. Déby is of the Bidyat clan of the Zaghawa ethnic group. Read more on Wikipedia

Idriss Déby is most famous for being the president of Chad from 1990 to 1993 and from 1997 to present. He is also the chairman of the Patriotic Salvation Movement.

Among politicians, Idriss Déby ranks 3,676 out of 15,710. Before him are Sajida Talfah, Ruzi Ying, António de Spínola, Ambrosius Aurelianus, Sverker II of Sweden, and Emperor Duzong. After him are Artabanus IV of Parthia, Maria of Castile, Queen of Aragon, Erhard Heiden, Archduchess Elisabeth Franziska of Austria, Condoleezza Rice, and Seleucus III Ceraunus.

In Republic of the Congo

Others born in Republic of the Congo

Among POLITICIANS In Republic of the Congo