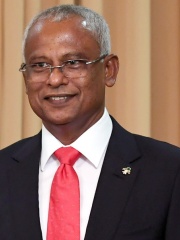 Ibrahim Mohamed Solih (Dhivehi: އިބްރާހީމް މުޙައްމަދު ޞާލިޙް; born 1 March 1962), better known as Ibu (އިބޫ), is a Maldivian politician and the current President of the Maldives who assumed office on 17 November 2018. Solih was first elected to parliament in 1994, aged 30, as the MP from his home atoll of Faadhippolhu. Solih played a leading role in the formation of the Maldivian Democratic Party (MDP) and the Maldives Political Reform Movement from 2003 until 2008, which led to the country adopting a new modern constitution and multiparty democracy for the first time in its history. Read more on Wikipedia

Since 2007, the English Wikipedia page of Ibrahim Mohamed Solih has received more than 251,796 page views. His biography is available in 24 different languages on Wikipedia making him the 12,325th most popular politician.

Others born in Maldives

Among POLITICIANS In Maldives