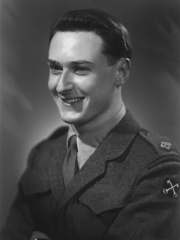 Ian Macpherson McCallum Stewart (15 July 1929 – 19 March 2017) was a British racing driver from Scotland. Stewart was regarded by Jim Clark as a highly-strung individual who "at the wheel was as relaxed as anyone". His only appearance in a World Championship Grand Prix came at the 1953 RAC British Grand Prix, in which - due to ignition failure - he failed to finish in his Ecurie Ecosse-entered Connaught-Lea Francis A. Stewart's main competition was as part of the Jaguar racing Ecurie Ecosse team.Stewart made a name for himself racing a Jaguar XK120 in British national events, winning 23 races in just three seasons, including the Jersey International and the Wakefield Trophy. Read more on Wikipedia

Since 2007, the English Wikipedia page of Ian Stewart has received more than 29,431 page views. His biography is available in 15 different languages on Wikipedia. Ian Stewart is the 691st most popular racing driver, the 4,983rd most popular biography from United Kingdom and the 119th most popular British Racing Driver.