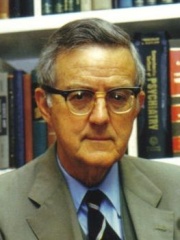 Ian Pretyman Stevenson (October 31, 1918 – February 8, 2007) was a Canadian-born American psychiatrist. He worked for the University of Virginia School of Medicine for fifty years, as chair of the department of psychiatry from 1957 to 1967, Carlson Professor of Psychiatry from 1967 to 2001, and Research Professor of Psychiatry from 2002 until his death.As founder and director of the university's Division of Perceptual Studies, which investigates the paranormal, Stevenson became known for his research into cases he considered suggestive of reincarnation, the idea that emotions, memories, and even physical bodily features can be transferred from one life to another. Over a period of forty years in international fieldwork, he investigated three thousand cases of children who claimed to remember past lives. Read more on Wikipedia

Among philosophers, Ian Stevenson ranks 619 out of 1,089. Before him are Pierre Charron, Maurice Blondel, Johan Vilhelm Snellman, William Paley, Roman Ingarden, and Zeno of Sidon. After him are Dignāga, Ernst Moritz Arndt, Fulbert of Chartres, Zhiyi, Arete of Cyrene, and Jean-Marie Guyau.

Among PHILOSOPHERS In Canada