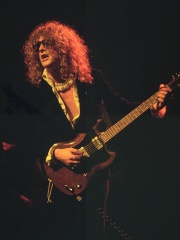 Ian Hunter is the stage name of Ian Hunter Patterson (born 3 June 1939), an English singer-songwriter and musician who is best known as the lead singer of the English rock band Mott the Hoople, from its inception in 1969 to its dissolution in 1974, and at the time of its 2009, 2013, and 2019 reunions. Hunter was a musician and songwriter before joining Mott the Hoople, and continued in this vein after he left the band. He embarked on a solo career despite ill health and disillusionment with commercial success, and often worked in collaboration with Mick Ronson, David Bowie's sideman and arranger from The Rise and Fall of Ziggy Stardust and the Spiders from Mars period.Mott the Hoople achieved some commercial success, and attracted a small but devoted fan base. Read more on Wikipedia