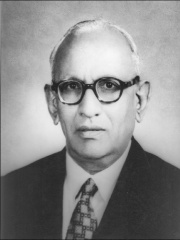 Ibrahim Ismail Chundrigar (Urdu: ابراہیم اسماعیل چندریگر‎; 15 September 1897 – 26 September 1960), best known as I. I. Chundrigar, was the sixth Prime Minister of Pakistan, appointed in this capacity on 17 October 1957 until being removed due to the vote of noconfidence movement on 11 December 1957. Trained in the constitutional law from Bombay and one of the Founding Fathers of the Dominion of Pakistan, Chundrigar's tenure is the second shortest served in the parliamentary history of Pakistan just after that of Nurul Amin who served as prime minister for 13 days. Read more on Wikipedia

Since 2007, the English Wikipedia page of I. I. Chundrigar has received more than 91,510 page views. His biography is available in 21 different languages on Wikipedia making him the 13,078th most popular politician.

Page views of I. I. Chundrigars by language

Among politicians, I. I. Chundrigar ranks 12,955 out of 14,801. Before him are Alfred Sant, Ulrich Wehling, Carme Chacón, Éamonn Ceannt, Jean-Max Bellerive, and Fiona Graham. After him are Bernd Mayländer, Arnaud Montebourg, Elizabeth Dole, Isidore Mankofsky, Andrea Giani, and Hugh Gaitskell.