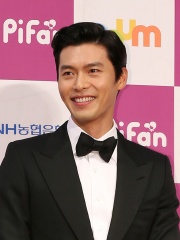 Hyun Bin (born Kim Tae-pyung on September 25, 1982) is a South Korean actor. Hyun Bin first gained wide recognition for his role in the 2005 romantic comedy television drama My Name is Kim Sam-soon. Since then, he has appeared in leading roles in other successful television shows including; the romantic fantasy drama Secret Garden (2010–2011), fantasy drama Memories of the Alhambra (2018–2019), and romantic drama Crash Landing on You (2019–2020). Read more on Wikipedia

Since 2007, the English Wikipedia page of Hyun Bin has received more than 6,006,257 page views. His biography is available in 22 different languages on Wikipedia making him the 3,629th most popular actor.

Among actors, Hyun Bin ranks 3,603 out of 8,832. Before him are Selma Ergeç, Thelma Todd, Sheryl Lee, Freida Pinto, Park Yoo-chun, and Maurice Costello. After him are Joan Hackett, David Proval, Hiroshi Abe, May Robson, Catherine Bach, and Kevin Durand.