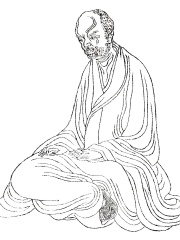 Huiyuan (Chinese: 慧遠; Wade–Giles: Hui-yüan; 334–416 AD) was a Chinese Buddhist teacher who founded Donglin Temple on Mount Lushan in Jiangxi province and wrote the text On Why Monks Do Not Bow Down Before Kings in 404 AD. He was born in Shanxi province but after a long life of Buddhist teaching he wound up in Jiangxi province, where he died in 416. Although he was born in the north, he moved south to live within the bounds of the Eastern Jin Dynasty. Huiyuan was posthumously named First Patriarch of the Pure Land School of Buddhism. Read more on Wikipedia

Page views of Huiyuans by language

Among philosophers, Huiyuan ranks 529 out of 1,081. Before him are Saul Kripke, Carl Stumpf, Arthur Danto, Gorakhnath, Giovanni Girolamo Saccheri, and Hegesias of Cyrene. After him are Al-Shahrastani, Al-Baydawi, Dharmakirti, Cesare Ripa, Chaïm Perelman, and Crates of Mallus.